What Is Aes Crypter Lite?

"Advanced Encryption Standard (AES) is a symmetric-key encryption standard adopted by the U.S. government. The standard comprises three block ciphers, AES -128, AES-192 and AES-256, adopted from a larger collection originally published as Rijndael. Each of these ciphers has a 128-bit block size, with key sizes of 128, 192 and 256 bits, respectively. The AES ciphers have been analyzed extensively and are now used worldwide..." [source: Wikipedia]

Aes Crypter Lite is very handy to use: once a valid password has been entered, simply drag and drop all files/folders You want to encrypt/decrypt on the interface of the program, and let the software do all the job for You instantaneously and without hardly occupying system resources.

Moreover, data can be compressed/decompressed on the fly before encryption/decryption in order to minimize file system size and increase security.

Two versions of the program are provided. Both will run on Microsoft Windows OS on any type of File System You like (FAT16, FAT32, EXFAT, NTFS). Apart from the most classic and easy-to-use Graphic User Interface (GUI) application, a Command Line Interface (CLI) version, very useful to be used within script files, is available as well. Of course, they are fully compatible to each other. 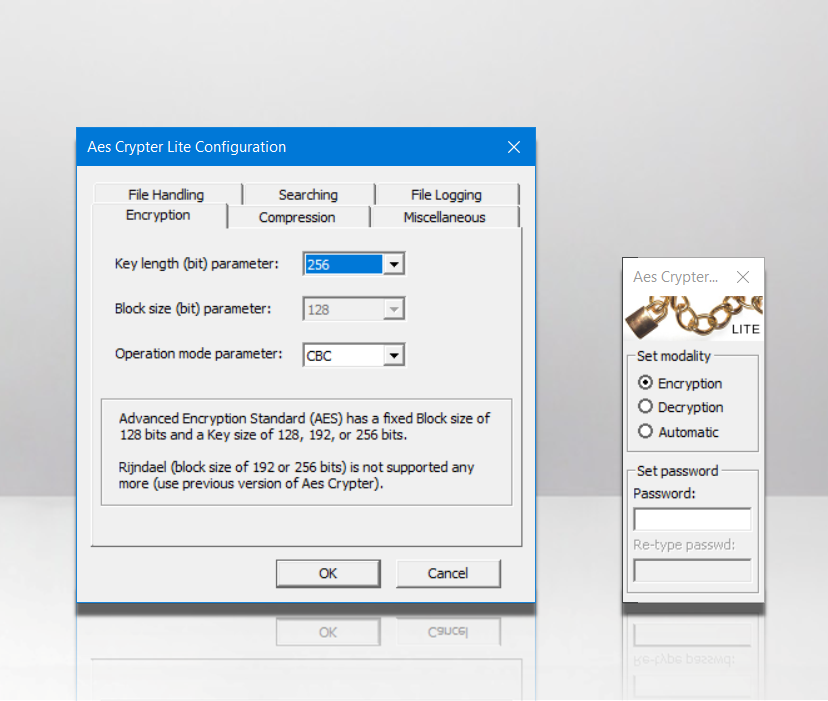 Fast as a lightning. All source code is written in C++. The internal core is now supported by Crypto++ library. En/Decoding is up to 10-50% faster than in the previous release! Moreover Aes Crypter Lite uses the latest and most performance libraries for encryption and data compression.

Really easy to use.  A fully functional and renewed Contextual Help (Tooltip) will help You at any time and an improved log handling will tell You what's happened on Your files by means of 4 levels of detail. Check out how handy is using Automatic Modality in conjunction with the drag'n drop functionality.

Greater security (2/5).  All files to be encrypted/decrypted can be compressed/decompressed on the fly using two different algorithms (gzip and bzip2 with user selectable compression ratio). This allows both to minimize data size and to greatly increase safety, complicating data reverse engineering.

Greater security (3/5).  Both temporarily data created at runtime and original files not useful any more, can be automatically deleted by using Wiping technology with user selectable steps: for each of them, files will be overwritten using three different patterns.

Greater security (4/5). The original name of each file that is going to be encrypted, is stored inside the new file. By doing that, You are allowed to change the encrypted filename whenever You like, because Aes Crypter Lite will remember the old name during the decryption phase. Changing the name of the file prevents someone to guess the contents of the file by looking at its name.

Select the right files at the right time.  A pattern-matching string can be set in order to select the files You really need to encrypt/decrypt/compress, keeping all other files out.

It's free.  You are FREE TO USE this application by respecting the Licence Agreement.

Aes Crypter Lite can be run over different releases of Microsoft Operating Systems.

For all OS versions, Aes Crypter Lite is going to use less than 2 MBytes/RAM during runtime regardless of the size of processed file.

Of course it's mandatory to have a mounted read/write file system in order to save encrypted files.

This website uses cookies: a) necessary (technical) for the use of the site and related services; b) optional (analytical and profiling, including from third parties, to show you personalized ads based on your browsing habits) with prior consent.
Their use is governed by the relative cookie policy, read by clicking here.
For the consent to optional cookies you can accept them all by clicking on the Accept all button below.